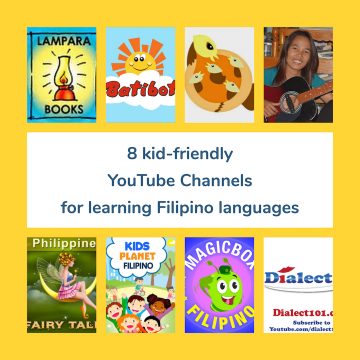 Learning a language requires frequent exposure to train your child’s ear to hear the new sounds. Even if you don’t live near native speakers of your target language, you can start with watching and listening to YouTube videos. We’ve compiled a list of the best kid-friendly YouTube Channels for learning Tagalog/Filipino, Bisaya/Cebuano, Ilokano and more!

This channel features Kuya Jun reading storybooks with a background music and illustrations from the original books. This channel has a variety of stories and illustration styles that will appeal to both younger and older children. The videos are not animated and do not have subtitles.

The original Filipino children’s show! This channel does not have full-length episodes, only selected clips. There are a mix of songs, stories, animation, and puppets. There are no subtitles.

These channels are similar. They have classic fairy tales and fables retold in Tagalog/Filipino. These videos are simple animated cartoons and they do have English subtitles.

This channel features a handful of songs in Ilokano sung by a child with lyrics.

This channel features vocabulary videos in multiple languages including: Tagalog/Filipino, Cebuano, Ilokano, Iloongo/Hillangyon, Pangasinan, Bikol, and Kapampangan. Go to their playlist section to find the videos sorted by language. The videos are basically flashcards with an image, English word, and the word in a Filipino language.

This website uses cookies to improve your experience while you navigate through the website. Out of these, the cookies that are categorized as necessary are stored on your browser as they are essential for the working of basic functionalities of the website. We also use third-party cookies that help us analyze and understand how you use this website. These cookies will be stored in your browser only with your consent. You also have the option to opt-out of these cookies. But opting out of some of these cookies may affect your browsing experience.
Necessary Always Enabled

Any cookies that may not be particularly necessary for the website to function and is used specifically to collect user personal data via analytics, ads, other embedded contents are termed as non-necessary cookies. It is mandatory to procure user consent prior to running these cookies on your website.