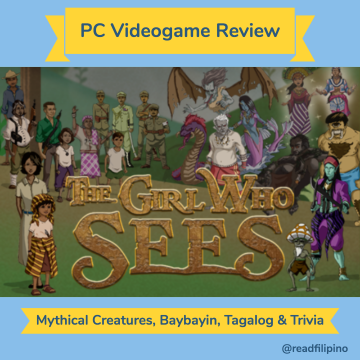 When it comes to learning about a culture, I’m always fascinated by language and folklore. So it was no surprise that I jumped at the chance to try out a videogame that incorporates Filipino languages, mythical creatures, and trivia! The Girl Who Sees is a 2D point-and-click PC adventure that showcases Filipino history and culture amidst the backdrop of Japanese occupation during World War II. The game is produced by InterIntellectus. This non-profit organization, based in Silver Springs, Maryland, USA, is dedicated to creating tech and gaming for intercultural learning. How cool, right?

I received a complimentary copy of this product but the opinions stated here are all my own.

The Girl Who Sees begins in a village in Mindanao, southern Philippines. We are introduced to Quina Laban (pronounced “KEE-nah”, yes kinda like the food quinoa). I’m already loving the game since laban, means to fight in Tagalog. We learn that Quina is not able to attend school due to lack of funds for school fees, so she typically helps out her mother with their laundry business. Quina heads to the forest to find some merienda (morning snack). In the forest she encounters mythical creatures and starts a quest to translate ancient scrolls written in Baybayin into Tagalog and English (a pre-colonial indigenous script of the Philippines). The name of the game comes from Quina seeing Tagalog words in the forest.

The game has two modes of play, discovery mode which involves answering multiple choice trivia questions or battle mode which is the traditional role-playing fight mode. I’m not an avid gamer, so I found the discovery mode more interesting and faster paced. The battle mode requires you to move a character close to the opponent, use an attack, and then end the turn. You do have to choose one mode of play for the entire game, so you will need to start a new game to try the other mode.

Throughout the game Quina collects items such as kamote (sweet potato) and other trinkets that she eventually trades for information or skills. There is an abularya (healer) where Quina and her companion Edgar can make potions for special attacks. The attacks have awesome names like Palo Strike (palo = to hit), Tsinelas Stun (tsinelas = sandals), and Bawang Bomb (bawang = garlic).

The graphics are great. I loved seeing the different artist interpretations of creature from Filipino folklore including the duwende (dwarf), kapre (a cigar smoking tree giant), and the manananggal (half-body vampire-like creature).

I appreciated the fact that there are so many different regions of the Philippines represented in the scenes of TGWS. One aspect I’d like to see more of is incorporating a variety of vocabulary to bring more representation to 170+ languages spoken in the Philippines.

The game is recommended for ages 13+, due to the war theme. Some of the mythical creatures look scary and there is some dialogue about a young girl being careful around the soldiers. The fight scenes are not really graphic, just a pixelated pool of red left behind when an opponent dies. It is a role-playing game, so there is a lot of dialogue to read. I personally felt ok playing the game with my 8-year-old son. But full disclaimer, I haven’t completed the entire game, so there may be more PG-13 scenes in the game that I haven’t encountered yet.

It’s not as slick or fast-paced as apps made for video game consoles or mobile devices, but keep in mind that the game was developed on small budget from Kickstarter donations. Overall the game is a unique way to learn about the culture of the Philippines. I highly recommend it for both kids and adults!

Try It for Yourself

A demo of the game is available at https://www.girlwhosees.com/game-demo
Available for play on computers using Windows or Apple OSX. The game is not available for mobile devices or tablets.