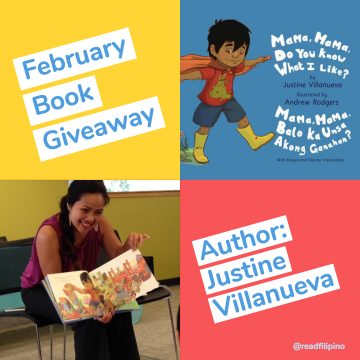 I’m excited to introduce you to Justine Villanueva, author of Mama, Mama, Do You Know What I Like?, illustrated by Andrew Rodgers. She is a Filipino-American originally from Malaybalay, Bukidnon, Philippines . She currently lives in Davis, California with her husband and two sons. Let’s get to know her a little better!

What languages do you and/or your family speak?

We speak a combination of English, Bisaya-Cebuano (my mother tongue), and Spanish (which I also speak and because my kids are in a Spanish immersion school). My kids used to speak fluent Bisaya-Cebuano until they reached kindergarten. As soon as they started school, however, they started to speak English more. It makes me a little bit sad that my eldest is now more fluent and conversant in Spanish than in Bisaya-Cebuano. I know that for them to re-learn my language at this age, I need to take them back to the Philippines and immerse them in the culture and language (for a chunk of time).

What was your inspiration for writing bilingual children’s books?

Initially, when my eldest was a toddler, I simply wanted to have story books to “read” in Bisaya without having to translate. At the end of a long day, when my brain was exhausted from the millions of things I had to do, having to translate stories was doubly and unbearably exhausting.

Later, when I started looking around for children’s books that featured Fil-Am kids and their stories, I found only a few. I was really shocked. I thought there would be more given the Fil-Am population in the US. I started to learn more about the struggle for diversity and equity in children’s books (and publishing, in general) and became motivated to do something about this scarcity.

I started to put together my own language books using cardboards and markers. But then a friend introduced me to her friend who crowdfunded her own children’s book and that got me thinking and believing that I, too, could crowdfund my own children’s book. I set out to do that and my first book came out in 2016. Soon thereafter, I formed a nonprofit small press, Sawaga River Press, named after the river that runs through my hometown in Malaybalay, Bukidnon, Philippines. We aim to publish books that highlight Filipino kids in the diaspora and their stories, especially as they relate to our Filipino indigenous values and the indigenous values of the lands where Filipinos have settled.

What future book ideas are you working on?

We are currently working on our second book, Jack Meets Layuk, about a young Fil-Am boy, Jack,  who longs to see himself in the books that he reads. It is also a story about reclaiming our ancestral roots and our resistance to being erased. We hope to have the book out by May or June 2019. For more info check out our Indiegogo Page and our blog.

Our third book, tentatively planned for December 2019, will involve food!

What is your favorite Filipino food?